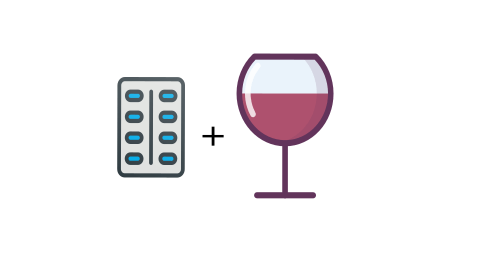 You’ve probably seen a warning on a bottle of Tylenol or Advil that says : “Avoid alcoholic beverages”. But… you probably ignored it. You thought, “Can a glass of wine really be so bad?”. Let’s look at the science, shall we?

Which meds interact with alcohol?

The answer is, it’s not clear. There is no absolute consensus in the scientific community; different papers consider different drugs as interacting with alcohol. Medications for cardiac problems, diabetes and gastrointestinal problems are usually on the list of “not compatible with alcohol” (Holton).

But other very common medication also have negative effects when combined with alcohol. Some pain medications that can be purchased without prescription, like Advil, Midol (ibuprofen), Tylenol (acetaminophen), can damage your liver, cause bleeding and ulcers and increase your heart rate. If you just took some Benadryl, Claritin or Tylenol to fight a cold or allergies, alcohol can make you more drowsy or dizzy. Even some herbal medicines, like lavender or Saint John’s Wort, can interact with alcohol (National Institute on Alcohol Abuse and Alcoholism).

A class of drugs that is often prescribed to treat anxiety disorders is benzodiazepines. This class includes alprazolam, which is present in Xanax and diazepam, present in Valium, and chlordiazepoxide, present in Librium. Benzodiazepines are not metabolized as fast when alcohol is in your body. The combination of alcohol and benzodiazepines can cause breathing difficulties, memory problems or weird behavior (National Institute on Alcohol Abuse and Alcoholism). The combination has led—and still leads—to many deaths (Tanaka).

Similarly, certain medications used to help attention deficit disorders, such as Adderall (amphetamine), Concerta or Ritalin (Methylphenidate) increase the risk of heart problems when consumed with alcohol. All medicines against depression, when combined with alcohol, increase the negative emotions and feelings of hopelessness, while some decreased motor control or had negative side effects on the heart (like Celexa, with active ingredient citalopram, Prozac, which contains fluoxetine, and Zoloft, which contain sertraline).

But there is still a lot that we don’t know. A paper published in 2017 remarked that we really need to determine a definitive list of all medicines that can interfere with alcohol (Holton).

How does alcohol interact with meds?

There are 2 types of mechanism by which alcohol interacts with the medicine. The first way is when alcohol messes with the assimilation of the medication by your body. This is called pharmacokinetic interaction and it usually happens in the liver, because both medications and alcohol are processed there. The second way that alcohol can interfere is if alcohol makes the symptoms worse, and that mostly happens with medications for psychological troubles, like depression, anxiety or attention deficit disorder (Weathermon & Crabb).

How prevalent is the problem?

Do people actually drink alcohol while on medication? Yes. Most studies about alcohol and medication interactions were done on the older population, because the majority of them (more than 75%) regularly take prescription or over-the-counter medication (Adams). About half also drink regularly (Zanjani et al, "Acceptability of intervention materials").

So not only is the problem real, it’s getting worse. This is probably because more and more medications are taken at home rather than in the clinic, where a doctor can supervise the patient and the latter has less responsibility for their own care. Also, many medications that used to require prescriptions can now be purchased over the counter (Phillips et al).

Although the problems caused by interaction of alcohol and medication are getting worse, the numbers are still small. Less than 4000 people died of such interactions in 2004 (Phillips et al). But a question remains: how much alcohol is needed to cause those effects?

How much is too much?

There is no definite answer. For example, the researchers who examined the death certificates did not know if the increase in deaths due to the combination of alcohol and medication was caused by occasional or heavy drinkers (Phillips et al). Some medicines react with any alcohol, while others only cause negative effects with regular or abusive use (Weathermon & Crabb). For some medicines, it may be that the more alcohol you take, the worse the effects are. But the scientific community is not certain about which medicine falls into which category. Because it’s unclear, the safest option is to avoid alcohol altogether when you are taking medication that warns against it.