Borat: Adventure in the minefield of Muslim stereotypicalities 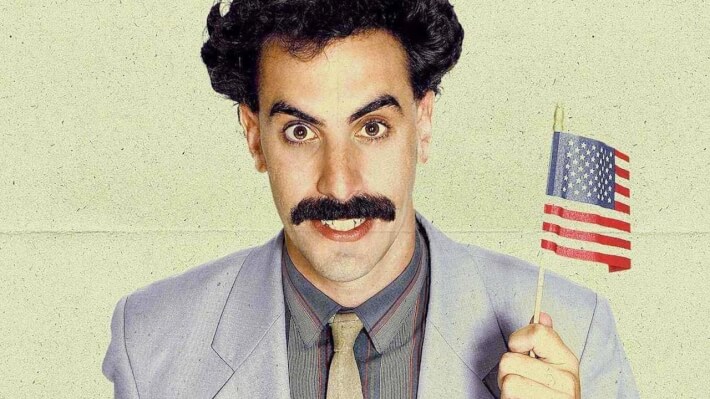 Borat: Cultural Learnings of America for Make Benefit Glorious Nation of Kazakhstan is a suicidally offensive film that is extremely funny at the same time. Borat, the hero of this extraordinary film, is a TV reporter from Kazakhstan that goes to the U.S.A to try and learn from the western culture, in hope to import some values that would push his country forward. While staying at his modest hotel, that has already amazed him and his obese producer, Borat watches Baywatch and falls in love with the sexy blonde Pamela Anderson. Borat then sets a new goal of marrying his so believed virgin Pamela and taking her back to his country. Borat must take a long journey all the way from New York to California to reach Pamela and on his way he will have very weird encounters with different people.

At the beginning of the film, we get introduced to Borat’s home village and we can immediately notice the regressive representation of the Islamic culture in Muslim countries (Charles "Borat: cultural learnings of America for make benefit glorious nation of Kazakhstan"). Women have virtually no value, power, or place in a typical Muslim house. This is very similar to what Alsultany’s claimed in her paper saying that Muslim/ Arab women were mostly represented in modern television as veiled and oppressed (Alsultany 8).

Furthermore, Alsultany mentioned how Arabs/Muslims are represented in the media as extremely anti-Semitic, brain-washed, and trained Jewish haters (Alsultan 9). Borat succeeds in demonstrating this in a satire way by mentioning one his community’s traditions: the running of the Jew; his believes that the Jews were responsible for 9/11; and Borat and his producer’s absolute terror when they knew they were staying at a Jewish house (Charles "Borat: cultural learnings of America for make benefit glorious nation of Kazakhstan").

Finally, relating to Alsultany’s description of a good and acceptable Muslim in the media where she wrote “’good’ Arabs and Muslims became those who would help the United States fight Arab/Muslim terrorism— whether or not they were American” (Alsultany 10). We can see something very similar to this when Borat went to the rodeo stadium and began first by declaring his support to the U.S. government and its war against terrorism and even wishing that the army would kill every man, women, and child in Iraq. All the crowd went crazy for him and cheered him all along, but when Borat started singing his national anthem he got booed and kicked out of the stadium (Charles "Borat: cultural learnings of America for make benefit glorious nation of Kazakhstan").

In conclusion, Borat was successful in representing the common known image of Muslims/Arabs in the U.S. in a satire yet bold way. Unsurprisingly, Alsultany’s ideas about Arabs/ Muslims representations in the media after 9/11 were clearly present in the film without any kind of veiling. The film shows how the American society only views Muslims and Arabs as good and acceptable when they manifest their support to the U.S government and its actions and policies through a set of actions that help fight or condemn the terrorist enemies. Also, Islamic countries are portrayed as a birth place of regressive societies where people rise to the top of the social hierarchies through brute application of force and power. Thus, giving men hold on all the social constructs possible and disfavouring women and making them as oppressed and miserable as they could be.