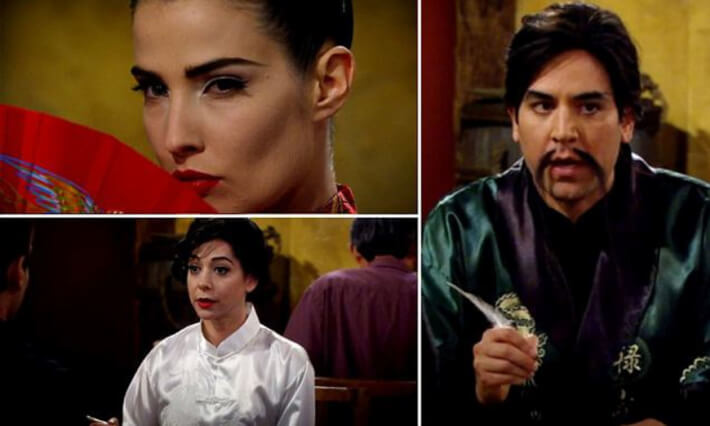 In the 1984 film Sixteen Candles directed by John Hughes, there is a Chinese character whose name is Long Duk Dong. Despite his minor role, he has quite a few memorable quotes such as “Oh, sexy girlfriend… Banzai!” and “Oh, no more yankie my wankie. The Donger need food!” (Hughes 1:04:11, 1:14:53) Most of the actor’s lines are laughter, onomatopoeias and a stereotypical Chinese American accent, painting him as the laughing stock of the film. Although this movie is 35 years old, similar depictions of East Asians remain in Hollywood to this day such as Ghost in the Shell (2017), [where] Scarlett Johansson, a white actress, is cast as […] the Japanese protagonist,” and “Doctor Strange (2016) [where] Tilda Swinton plays […] a Tibetan monk.” (Paner 6) La Force points out that it’s “unlikely to see Asian-Americans in lead roles in big studios films without the hint of tokenism.” (La Force) The portrayal of people of the Eastern world in film is a debatable topic due to the image that it gives off to the viewers of this minority in the Western world. According to Kant’s rationalism, this misrepresentation is ethically immoral and should not be allowed in the media. Not only does it disrespect the categorical imperative since representing all people this way would demolish all reputation and disrupt diversity, but it would also use an ethnicity, thus people, as a means to an end, entertainment, both of which are considered unethical by rationalism.

According to Hiramoto, “East Asian characters, regardless of gender, are positioned as racial Others.” (Hiramoto 542) If every ethnicity were to be shown as their common stereotypes in movies like Asians often are, everyone would view different people as “the other,” which ruins all chances at a peaceful society that is multicultural. Some can argue that the Asian characters are a mere reflection of how society perceives them to be: “pathetic perfectionists who never got the meaning of life, who’re unable to live with abandon and therefore with romance,” which doesn’t make a very interesting main character. (La Force) In this case, the categorical imperative could not have been broken because there’s no infringement of justice if it’s an accurate representation. The group also consists of a minority, therefore it’s normal that there are less Asian characters than Caucasian ones. The argument fails when the people in question are taken into consideration. Many of the Americans who think that Asians are a “model minority” are also the ones susceptible to being influenced by the image portrayed by the media. They usually simply aren’t aware of how Asian Americans are integrated into their society, which creates “detrimental cultural and social consequences.” (Paner 5) Asians are the most underrepresented minority by Hollywood, since of the “top 100 films of [2017], 37 didn’t include a single Asian character with a speaking role.” (La Force) To test the categorical imperative and determine whether this type of portrayal is acceptable, one has to imagine a world in which everyone succumbs from this treatment and realize whether it’s a sustainable world. Having each person on Earth made fun of on media would cause the same feeling of being othered for all, making it impossible for the various ethnicities of North America to get along. The representation of this minority in film and television disrespects the categorical imperative, making it an immoral act.

The media uses cultural stereotypes for comedy purposes, reducing people of this ethnicity to no more than a tool to get laughs and gain popularity. Especially since there are rarely any role models for Eastern cultures in the media, the common depiction of “East Asian women as oversexed and East Asian men as undersexed” “[leads] to feelings of inferiority.” (Hiramoto 542, Paner 5) By rationalism, since all humans possess reason but animals don’t, humans are considered better than them, and should never be reduced to such by taking away that reason. Using humans as a means to an end is strictly forbidden, as it puts the person at the level of a simple object. However, it can be argued that film is an art rather than a platform to share facts, and therefore should never be censored and blocked from its full creative potential due to censorship being a tool to block people from reason. Also, having actors represent this minority at all is already an improvement from the previously never-shown Asians in Hollywood, as it establishes the presence of their group and doesn’t necessarily paint a hurtful image: Asians are always shown as intelligent and hard-working. As Tseng-Putterman explains, “Western expectations still cast a long shadow over [Crazy Rich Asians],” meaning that even the most representative films are made for the purpose of entertainment, to satisfy a wider range of people. (Tseng-Putterman) By Kant’s beliefs, this total disregard of this part of the populace, perhaps because no one represents them in the industry, is considered to be unethical because it is never right to belittle people to the level of objects. In extreme situations, it can even lead people to perceive Asian women as “exotic and submissive [which] contributes to a higher risk of sexual assault.” (Paner 24) This would be even worse for rationalists because women being seen as sexual objects not only takes away their reason, but also doesn’t pass the categorical imperative. If all women were to be sexually assaulted, then society would be taking a step backward as well as causing even more ethical dilemmas to surge such as abortion. Additionally, refusing to represent this group as they are in society is a form of censorship itself. Only because the writers or producers believe that it is an accurate representation doesn’t mean that it’s the only way to portray them in the media. This negative portrayal of a community is an example of using humans as a means to an end, which is unacceptable for Kant.

Following Kant’s rationalism, it can be established that it is ethically wrong to continue this inaccurate and highly stereotypical portrayal of Asian people in television and film. Disrespecting all groups in a similar manner would disrupt Western countries’ multicultural population and treating humans as mere objects would take away their ability to reason. Even without knowing it, other groups, even minorities, can easily judge Asians from what they’ve see on-screen. There is a big movement encouraging the film industry to stop misrepresenting minorities, and this should just as much apply to this group that has not deserved being labeled as tropes from movies.

Paner, Isabel. “The Marginalization and Stereotyping of Asians in American Film.” Dominican Scholar, May 2018, 1-33.