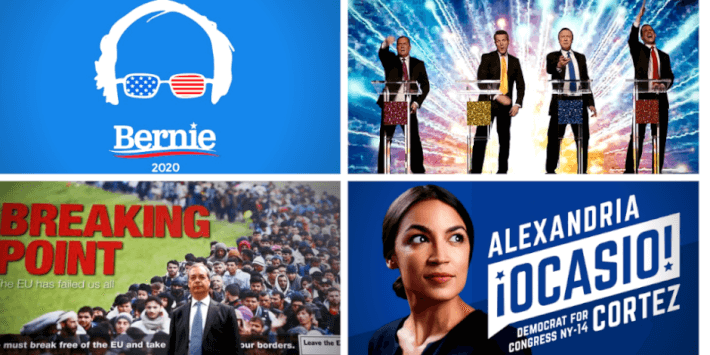 Although paid political advertisements are usually viewed in a negative way, they are not as bad as non paid advertising. According to Sanchez, “Paid ads have very little to do with how political deception spreads online, and doing away with them will likely hamper legitimate political speech” (Sanchez).  That is to say that banning paid political ads will have a negative effect on politics since it will increase the popularity of already popular candidates. In other words, people who possess a larger amount of followers on social media will have a much bigger impact as opposed to others who do not. This means that “if paid ads aren’t available as a mechanism to break through and attract initial attention and support, then the importance of the people and institutions that already have large audiences will be magnified and entrenched” (Sanchez). Furthermore, banning paid political advertisements will cause other ads such as issue ads to be banned as well, which will cause a negative outcome. As explained by Mr. Julian Sanchez, “That means an enormous number of activist groups of every ideological stripe, many of which may not think of themselves as engaged in “political advertising,” will discover they’ve lost an important means of raising awareness” (Sanchez). In sum, banning political advertisements won’t necessarily have a beneficial outcome.

Firstly, by allowing paid political advertisement, contrast and attack ads can influence the public in a negative way. Negative ads are advertisements that either attack an opponent by focusing on their negative aspects or contrast ads point out the positive aspects of the candidate while emphasizing the negative aspects of the opponent. According to The News Media and the Rise of Negativity in Presidential Campaigns, “During Bush’s campaign, some of the most controversial and discussed negative ads were aired, and as we know, Bush went on to win the 1988 elections” (Geer). Evidently, negative ads are very effective in persuading the public to make a choice based on minimal evidence. By allowing paid political ads to circulate on social media platforms, negative ads will continue to spread as well and in turn, convince the public to make a decision based on the wrong reasons. As elaborated by Darrell M. West, “a growing number of observers have argued that restrictions on context and sponsorship should be applied to the campaign area, particularly to deal with the negativity of contemporary advertising” (West). By terminating the ability to publish negative ads on social media, candidates will no longer be able to target other opponents the same way they have in the past.

Secondly, there are many advertisements, referring to politics, that is not entirely factual or completely fake circulating on social media. One of the reasons why Mr. Dorsey decided to ban paid political ads is because of fake news. “Internet political ads present entirely new challenges to civic discourse: machine learning-based optimization of messaging and micro-targeting, unchecked misleading information, and deep fakes. All at increasing velocity, sophistication, and overwhelming scale” (Dorsey). In other words, he explains that these ads consist of information that is not necessarily true. By allowing the false political advertisements to be posted on social media, the public opinion will be greatly affected. It’s for those reasons that Dorsey has decided to stop political ads altogether. Even the past head of global elections integrity ops of Facebook, Yael Eisenstaedt admitted that “we [Facebook] weren’t checking any facts or ensuring that ads weren’t spreading false information” (Eisenstaedt). In other words, Facebook, arguably the biggest source of paid political ads, ignores the possibility of fake news and always anything to circulate.

Lastly, banning paid political ads can be considered justifiable due to the fact that social media has a huge impact on many people's votes. Jack Dorsey said in his tweet that “while internet advertising is incredibly powerful and very effective for commercial advertisers, that power brings significant risks to politics, where it can be used to influence votes to affect the lives of millions” (Dorsey). Since twitter is a very large social media platform with many users, information published by people with a large amount of followers can have a great influence on their viewers. Voting should not be influenced by something so easily altered like a comment or a post on twitter but rather it should be influenced by valid and credible sources such as a newspaper, a fact-checked article, a reliable interview, and so on. Given the fact that campaign advertising on social media can persuade the public to vote based on insufficient information as opposed to a more legitimate, reliable and valid sources, banning political ads on social media will have a beneficial outcome overall.

To conclude, there are many reasons as to why Jack Dorsey made the right decision by banning political advertisement on twitter. Although many people may believe otherwise, banning these paid ads is extremely beneficial and important for the following reasons; Firstly, prohibiting these ads on social media helps filter out negative ads. Secondly, it helps eliminate some of the fake news that circulates. Lastly, it minimizes the effects of political ads with insufficient evidence on votes.

Dorsey, Jack (Jack). “We’ve made the decision to stop all political advertising on Twitter globally. We believe political message reach should be earned, not bought. Why? A few reasons…[...]” 30 October 2019, 1:05 p.m. Tweet.

Eisenstat, Yaël. “I Worked on Political Ads at Facebook. They Profit by Manipulating Us.” The Independent, Independent Digital News and Media, 11 Nov. 2019, https://www.independent.co.uk/voices/facebook-political-adverts-democracy-data-harvesting-employee-election-a9197956.html.