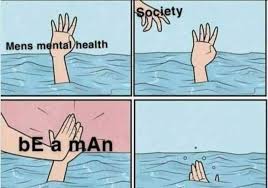 Suicide rates in men have been rising for a while now, men commit suicide at 4 times the rate of females.(Lester, 2014 p. 312) Questions such as; why men aren’t getting the help they need, how can students such as ourselves prevent this, are all important questions to ask yourself. A lot of things come into play concerning suicide and mental health, it isn’t a black and white topic. Factors such as environment, family history, social factors, stress, so on and so forth, all come into play when discussing suicide. (Fogarty et al. 2018 p.262) Everyone experiences stress and depression differently which can explain why rates of suicide in men would be higher than in women. To put it into perspective, Rutz et al (1995) put into a place a program for physicians in Gotland island in Sweden and studied depression and suicide within men and women, seeing if they can detect depression, prescribe the suitable medicine, and overall prevent suicide.  The results were stunning. Rates of suicide in women decreased on the island, while rates of suicide in men did not decrease. This study proves that depression in men and women affect them very differently, and symptoms are expressed differently since the physicians weren’t able to properly assess the men on the island. Men experience symptoms of depression as irritability, dysphoria, acting out, aggressiveness, low impulse control, anger attacks, substance abuse, etc. Oliffe and Philips (2008) said that depression in men is associated with a strong drive of achievement and success. In other words, the societal norms of masculinity can cause depression in men. These norms can be that men must always be tough and strong, independent, make a lot of money, so on and so forth. If men are seen as depressed, they will be punished by society since they aren’t following traditional masculine traits. (Lester, 2014 p.312) In the majority of cultures studied, men die by suicide around 4 times more than females. This is why suicide prevention programs for men must be normalised since they are such a high-risk group (Milne, Tepper, Petch, 2017) Millions of dollars are put into programs to encourage “help-seeking behaviour” yet men keep dying. Why is this happening?

It is no secret that men use health services much less than women do, and even delay getting help, which leads to seven fewer years of life compared to women. Biological issues, psychological and sociological considerations all have to do with men seeking health services. Men are considered to be reluctant consumers and behave badly in respect to their health. In all, the health care system we have in place now is not designed to meet men’s needs. Let’s look at it this way, the way men try to get health care services is equivalent to you asking a stranger for directions. By you needing to ask a stranger for directions, proves that you aren’t on your turf. By not being on your turf and being alone, you are on someone else’s turf and it gives them the right to kill you (well it did a couple thousand years ago.) Given the vulnerability of asking for directions, why would men even think about asking for help when they are suicidal? (Lester, 2014 p.315) This is the logic men use when trying to seek help, the vulnerability is stopping them from getting help. We must take into consideration that men are convinced that they’re purpose in life consists of 4 things. Protect, provide, protein and pro create (Lester 2014 p. 318.) When a man is not able to properly provide one of these four things, they are emasculated and seen as weak. It has been set in their brain that asking for help is a death sentence. A man will ask for help to someone he trusts with his life. Yet, when men are in a crisis and need help, we tell them to call a phone number and confide to a stranger about all their personal problems. Now we must think to ourselves, is this “men behaving badly” or men behaving wisely? The longer we wait for suicidal men to learn how to ask for help, the more we are just prescribing them a death sentence.  It is mandatory that we re- examine the social policies that make up the current suicide prevention programs. The assumption that men are okay with getting help from a stranger or will ask for help in the first place is inaccurate.

The ecological theory can help things change. The ecological theory is explained by “A framework for understanding the structure and function of community. Learning how the characteristics of the environment of the community can play a central role in the ways people interact and relate with each other.” By understanding the background of the person, their workplace, their personal life and upbringings, so on and so forth, we can learn how to properly assess them. Focusing on the 4 principles of the ecological theory is crucial when applying this theory to suicide in men. Interdependence, adaptation, cycling of resources and succession are the four principles that make up the ecological theory. By combining ecological theory and bottom-down approach of grass roots, it is certain that change will happen.  Bottom-down approach is great when talking about mental health since it uses a different approach than therapists do. By seeking help of others with the same mental health issues as yours you will feel more comfortable and less as if your talking to a stranger since the other person can relate to what you feel. This is especially essential when considering the factors of why men don’t seek help. By them feeling less vulnerable, it will make it easier for them to seek help. Individual empowerment is an important community psychology resource to take into consideration for suicide in men. Individual empowerment allows people to have a sense of control over their life and increase their control over life. By introducing the concept of individual empowerment in a bottom-down approach grassroot program it will help men feel a sense of autonomy and control over their life. Making these men feel less vulnerable, self-reliant, in control, and overall like they are having some sort of power over their life will result in fewer suicides in men.

To conclude, we must rethink the way men get help and rethink the resources they have because something is clearly wrong. Everyone deserves to live a life full of happiness but unfortunately men have a harder time doing so. We must stray away from stereotypes about men and thinking that men don’t need help. It is not a sign of weakness to ask for help it is a sign of strength. If you felt sick, you would ask a doctor for medicine, right? Let’s apply that same logic when we are feeling sick mentally.