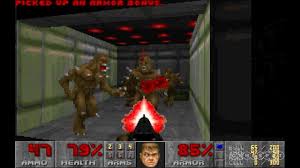 With the advent of technology, children and teens have had an increasing ease of access to online entertainment media, in particular, video games. 97 % of the teens of the ages 12 to 17 play video games (Scutti). Moreover, more than 85% of these video games contain some form of violence (Scutti). On April 20, 1999, such violence moved from the screen to real life when Eric Harris and Dylan Klebold, avid fans of the game Doom, killed thirteen people and wounded 23 others before shooting themselves at the Columbine High School shooting (Radford). This tragic event highlighted the ethical dilemma surrounding violence in video games. According to utilitarianism, as well as virtue ethics, although the action of developing a violent video game itself is ethical, by releasing it to the general public, it can be unethical due to the vices associated with this decision, as well as the amount of pain it could potentially cause to others.

Doom is a graphic first-person shooter game that pits the player against zombies. The game is known for its high levels of graphic violence and was even “licenced by the US military to train soldiers to kill” (Radford).

Recent research shows that there is “either no relationship between playing video games and violent behavior or an ‘insignificant’ link between the two” (Scutti), suggesting that the release of Doom was ethical, as all it did was create enjoyment for those who played it. Further, it denies any sort of relation between the game and the Columbine high school shooting. However, a link between Doom and the tragic events that unfolded at the Columbine high school is clear due to the discovery that the shooters had “compared the school shooting to Doom, saying murder would just be as easy as playing the game” (Syl). This suggests that they were able to use the violent nature of the game in order to mentally practice the shooting and were able to picture the students as zombies that needed to be killed. Thus, the release of Doom, which had a role in the shooting, created a lot of pain and sadness to the victims of the incident due to the thirteen deaths, making the action of releasing Doom unethical in a utilitarian perspective.

In addition, from the perspective of somebody who practices virtue ethics, Doom’s release is still unethical due its vice of ignorance and its lack of virtues such as compassion and empathy. Although the developers are aware that Doom could potentially influence another person to behave more aggressively, they ignore this, and choose to not see it from the victim’s perspective. Thus, the release of Doom, having indirectly caused such a tragic event, was an unethical action due to the negative consequences it bears, as well as the vices it entails.

Some argue that violence in video games could be used to evoke ethical thinking to build upon critical skills such as perspective-taking and reflection (Schrier 832). In first-person shooter games, the player is “not controlling a character, [rather they] are the character” (Moore).They suggest that some games use violence to allow players to think about the morality of their in-game actions, and thus become more ethical, moral people, thus justifying the use of violence in video games. However, the game’s goals are often set in a way to encourage instrumental rationality, where players will simply make decisions based on the game’s design rather than their moral beliefs (Sicart 31). Thus, players will be led to make decisions based on pure rationality rather than morality and may even translate that same cold rationality to real life. This same view could be applied to the Columbine high school massacre. In Doom, the objective is to kill the zombies before they kill the player. Rationally, the easiest solution would be to kill all the zombies, however by applying morality, one might decide to try and find a cure for these zombies. However, the game’s design does not permit it, and forces the player to follow the rational option, which is to kill those that try to harm him. The shooters may have applied this same logic in the real world, where they believed the only way to stop others from harming them, as victims of bullying, was to kill the others. Thus, violence in video games does not evoke ethical thinking, and only serves to strengthen the cold sense of rationality often found in games, which often leads to more unhappiness from the people around the people who play violent video games.

To conclude, the Columbine high school shooting demonstrates a grim, but inevitable outcome of a society where teens are flooded with images of violence. As teens consume entertainment media full of violence everyday, they are eventually desensitized to this violence, and perpetuate this violence in real life thinking that they are acting rationally and morally, though in reality, they are doing neither. After bringing this violence out of the screen, they cause grief and sadness around them, which is an unethical thing according to a utilitarian. Thus, video games developers must learn to be wary of what they decide to include in their games, since these can have very large impacts on the way teens act. Through increased parental control, many of these problems could be avoided. Additionally, stricter gun control in some parts of the world could also reduce the severity of these cases.