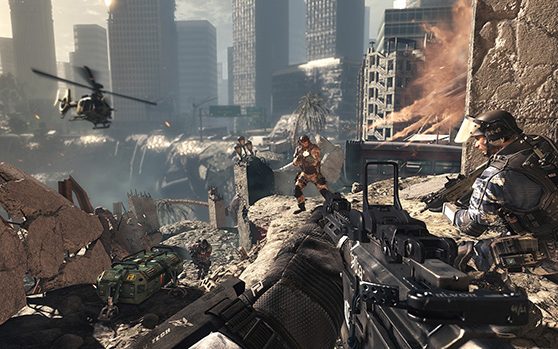 With the prevalence of mass shootings and our fearful reactions to them come discussions as to what causes these shootings. When the El Paso shooter reference Call of Duty, a first person shooter (Romano), the recurrent blame on video games was brought up once again. Since violent video games have the player directly engage in reproducing violent behaviour, it isn’t unfair to criticise these games of encouraging violent behaviour. However, not only is the causal link unclear (Fournis 2), but accusing video games prevents us from finding the root cause behind shootings. In fact, blaming violent video games for shootings not only hides the root cause and potential solutions, but also leads to censorship of a legitimate form of media. Due to the weak causal link between videogames and violence, and potential censorship of creative content, video games should not be censored.

In first person shooters such as Call of Duty, players directly engage in violence, having to shoot other players to win. Since violent video games lead to moral disengagement and increased aggression (Teng), it is unsurprising that video games are a common scapegoat after many shootings (Romano). However, a creative medium cannot be blamed for causing a systemic problem if a concrete causal link has not been established. Just as video games may be causing violence, being a creative medium they may as well be a projection of a deeper problem in American culture. Despite the correlations between violence and violent media, there are concerns when trying to control any form of media. Though reducing violent may reduce exposure to violent content, and thus violent behaviour, this reduction can also lead to some censorship and control of legitimate forms of media. Thus, the question of whether video games should be blamed and controlled is nuanced.

Firstly, although violent video games do tend to increase aggressive behaviour and decrease prosocial behaviour, there is no positive link between playing such video games and criminal behaviour. Instead, they can lead to a reduction in criminality, despite suggestions that mass murderers were influenced by video games. Such a reduction suggests the link between media and criminality is much more complex (Fournis). Because the links are complex and unclear, blaming video games is harmful to reducing violence. Being a scapegoat, blaming video games detracts from real, systemic issues. Per ethical rationalism, deliberately misleading ideas such as this are dishonest, and don’t pass the categorical imperative. Being dishonest, such ideas prevent people from finding the root cause behind such violence (Fournis), instead avoiding more promising solutions such as gun control. Essentially, video games don’t lead to more criminality, yet are blamed despite there being better solutions.

Secondly, blaming video games for causing violence detracts from their many benefits. Not are video games somewhat correlated with a decline in criminality (Fournis), but can even have many cognitive benefits (Barder). Furthermore, cooperation in multiplayer games can lead to cooperation in different circumstances, while reducing the effects of exposure to violence (Ewoldsen 279). Likewise, in spite of violent video games being demonised, they nonetheless have the goal of delighting players (Romano), which, by utilitarianism, is morally sound as it creates pleasure without harming anyone.

Finally, video games are a medium of creativity, which should not undergo censorship. Although early exposure to violent media does cause children to be desensitized, moral disengagement is reduced as players age. Additionally, with the help of adults, children and teenagers can reduce the tendency to disengage (Teng). As playing video games responsibly is possible, their existence can be morally sound. However, censoring video games, by sanctioning what content can be added to them, does violate the categorical imperative. Video games, being a creative medium, undergo the same moral treatment as other forms of media, protecting them from censorship. Additionally, Games are a unique medium for artists to express their ideas. Through their interactivity, games can express ideas unlike any other medium. Per virtue ethics, this makes video games virtuous, whether their content is violent or not. Also, violence in video games is not necessarily harmful. Video games can approach violence in a much more nuanced way (Romano), raising questions that other forms of media may not. In effect, video games can be consumed responsibly, and, being a creative medium, should not be censored.

In conclusion, in spite of legitimate concerns behind violent video games, such as a correlation with increased aggression, the lack of correlation with criminality, the potential benefits, and being a creative medium suggest video games should not be held responsible for shootings. Instead, using video games as a scapegoat hides systemic issues which are a bigger cause for concern, such as gun control. By better understanding the implications of media on violence and criminality, we can better establish whether they’re problematic. Thus, we can focus on finding root causes and their solutions.

Barder, Ollie. “New Study Shows That There Is No Link Between Violent Video Games And Aggression In Teenagers,” Forbes, 15 February 2019: https://www.forbes.com/sites/olliebarder/2019/02/15/new-study-shows-that-there-is-no-link-between-violent-video-games-and-aggression-in-teenagers

It is nice to see that a post defends video games. Most of the other posts on the subject are about how the violence in the games somehow transforms kids intro *blood thirty maniacs*. I have read about this and the only reason why some are influenced by violence in video games is because they already have a mental or a personality problem.