When the Roles Are Reversed 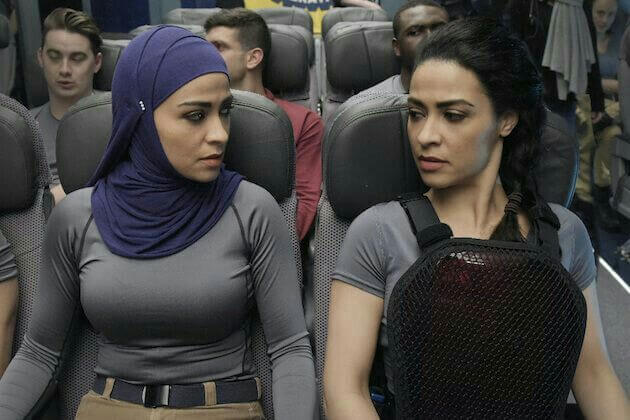 If I asked you to name one American movie or tv show that portrays a Caucasian Americans as a terrorist would you be able to? The TV series Quantico address this reality that is consciously and constantly remove of the United States narrative. The show’s narrative takes place on two different time frames overlapping each other. In the past time frame, we follow Alex Parrish, the brightest recruit, and her friends during their FBI training at Quantico. In the present events we witness Alex Parrish fight to find who falsely framed her for the terrorist attacks that hit Grand Central.

Alex Parrish, an Indian-American, encounters many characters during the show. Two of them are the Arab American twin sisters Raina and Nimah Amin. They’ve been recruited to act under the same identity and infiltrate terrorist groups after their Quantico training. Right away, they are categorized as what Alsultany would say “good Arabs” because they “[..]became those who would help the United States fight Arab/Muslim terrorism” (Alsultany, 10). Once again, the grey area of regular Arab and Muslims Americans citizens is under represented in the media. Raina Amin is the more religious sister. This hijabi woman is one who wanted to enter the FBI. Like her sister, she’s a proud Americans and is very vocal about it: “I’m grateful for the peace, safety and stability this country has offered to my family”. This unfortunately contributed to the American propaganda of the American Dream. She indirectly states that “the United States [is] the inverse of everything that is “Arab/Muslim”: The United States is thus a land of equality and democracy, culturally diverse and civilized, a land of progressive men and liberated women.” (Alsultany, 9). On the other hand, Nimah Amin isn’t Muslim. Strangely, she’s constantly suspicious and keeps her guard up. This is a direct reaction to her constantly being profiled and mistreated as a result of her Ethnicity. Therefore, she became an overachiever to compensate and try to change people’s bias opinions. Which such characters, the show is trying to characterizes and normalize different types of Muslim and Arab Americans to the eyes of Americans.

On the fifth episode of season 1 called “Found” the Quantico recruits receive the mission to pose as a person, infiltrate a company’s cocktail event and get a private meeting with the CEO without damaging their cover. Many use seduction tactics or their physical assets to try to gain access to the CEO while Raina doesn’t compromise her religious belief and succeeds. Compared to the movies and TV shows addressed by Evelyn Alsultany in her article, Quantico doesn’t include sympathetic images of Arabs and Muslims to compensate for the number of stereotypical images. Nor do they do it simply to respect an establish quota of Arab representation. In contrary, they give what we’ve established as stereotypical Arab/Muslim roles to White people. The terrorist behind the Grand Central bombing for which Alex Parrish was accused was done by her former Quantico professor Liam O'Connor.

Finally, I think that the characters of Nimah and Raina Amin do sometimes fall into the usual narrative of the “good Arabs”, but they are a great start to what could be a more honest representation of Arabs and Muslims on American television. Quantico is a very inclusive series that was able to showcase regular Arab and Muslims roles and break racial stereotypes.

Alsultany, Evelyn. Arabs and Muslims in the Media: Race and Representation after 9/11. New York University Press, 2012.

This article, from the beginning, caught my attention as it had a great hook. I think that the brief summary of the show was very helpful to later understand the episode 5 which was talked about in more details. I think this article was pretty straightforward as it could easily be linked to Assultany’s work and these links were very well explained. It was clearly stated how *Quantico* defied the usual portrayal of Arabs and Muslim in the U.S. since no sympathetic representations were shown and because the show seems to to give Arab/Muslim stereotypes to White people. Furthermore, it was interesting to see that *Quantico* could be a start of real and honest representations of Muslim and Arabs. This article was really good and easy to understand while still giving all of the information that was needed.

I really enjoyed reading this article! I have watched 2 seasons of the show Quantico and never have I ever thought about it this way. Looking at it from your perspective, I am able to critically think and analyse the show. The explanation of the show and the arguments used are well linked to Asultany's article. The show doesn't use Arabs/Muslims as terrorists but as patriotic fighters. Instead, by distorting the image of white people and giving them the terrorist title goes against the habitual stereotypes of Arabs and Muslims. Quantico gives a new light to Arabs and Muslims and it is indeed very nice to see. A well organised article and a great example to go with it!