Why Take Away One, But Not The Other? 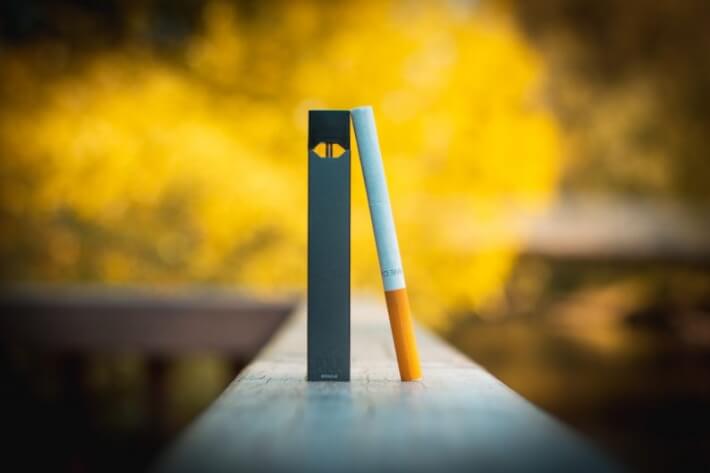 Nicotine & smoking. Two words that simply can’t go without each other. The topic of smoking and nicotine has been discussed in many academic disciplines throughout the last few decades, but uncoincidentally is still a hot topic for discussion today. The subject of smoking and more recently vaping which generally involves nicotine use, is one studied by scientists and argued by politicians and many other  professionals in the social sciences. But as we approach the end of 2019, the topic of vaping and smoking, along with the battle between governments and e-cigarettes businesses/enthusiasts continue. The recent action to ban e-cigarettes in San Francisco (Barro, “Instead of Juul, San Francisco Should Have Banned Cigarettes) but surprisingly not regular cigarettes has created an interesting debate and a more fascinating moral dilemma. The city’s decision has caused many to wonder if, e-cigarettes should be treated the same as regular cigarettes? The recent political issue taking place in San Francisco has many also questioning, what plan of action is the correct one? According to virtue ethics, e-cigarettes should be treated the same as regular cigarettes. With virtue ethics in mind, different perspectives will be examined throughout the paper, while finally explaining how the dilemma can be solved.

Many adults in North America, fear the e-cigarette market and its increase in popularity, specifically its increase in popularity within teenagers and young adults. Because of the high number of teenage e-cigarette users, San Francisco decided to ban the sale of all e-cigarettes in 2020. The city’s politicians argue that they are banning e-cigarettes because they are not FDA approved, along with the idea that the city has people hooked on nicotine who would have never smoked a cigarette “had it not been for the attractive products that target our young people” says San Francisco Supervisor Shamann Walton (Griggs, “San Francisco is set to ban Juul and other e-cigarette sales in 2020”). When considering various virtues such as responsibility, discipline, and moderation in this context, treating e-cigarettes differently than cigarettes would make sense. Considering the unknown long term effects of using e-cigarettes and their possible connections to lungs diseases, prohibiting the products aren’t too irrational, making it understandable to treat them differently since we don't know a lot about them. To that effect, local officials view youth vaping as an epidemic and a larger issue than youth cigarette use, making it reasonable, thus virtuous to treat e-cig use differently since it’s a responsible approach when tackling a larger scale issue that could be harming many adolescents. The decisions made by the city are virtuous since their main goal is to protect adolescents and young adults. Since virtue ethics deals with creating good habits in a sense, city leaders have followed the framework’s main concepts.

But on the other hand, even though e-cigarette usage among teens is a serious issue taking place in North America, prohibiting the sale of e-cigarettes is unfair as a whole. Banning the products create a conflict between fairness, responsibility and reasonability. Even though many new nicotine users may have been made due to the e-cigarette market, it seems a bit hypocritical to ban Juul and not ban cigarettes as well in San Fransisco considering how bad conventional cigs are for the health of adults and especially teens. According to the Harvard Health Blog, “electronic cigarettes are almost certainly less lethal than conventional cigarettes” ( Ross, “E-cigarettes: Good news, bad news”). The article further explains how both forms of nicotine usage are not healthy choices. For the city of San Francisco to be absolutely fair and reasonable according to virtue ethics, the prohibition of both products should be instituted. According to virtue ethics, smoking would be considered a vice. But when analyzing the dilemma specifically, the ethical framework would suggest that the city ban both unhealthy products to responsibility and fairly achieve their established goal of ending the youth nicotine use epidemic. Since both products are not safe for citizens of all ages it would make more sense to remove them both.

After examining the dilemma at hand and identify the two major standpoints prevalent, it seems right to conclude that both e-cigarettes and cigarettes should be treated equally and banned. In relation to virtue ethics, thick positive concepts, such as fairness should be the dominating factor in San Francisco's smoking/vaping issues, especially when a society’s law is into consideration. Since thick concepts are important to the ethical framework respecting them would essentially be key.

Barro, Josh. "Instead of Juul, San Francisco Should Have Banned Cigarettes."

Originally published in Representation, Reporting, and the Stories We Tell,

Vaping360.com. A JUUL e-cigarette, left, and a regular cigarette. CalMatters,

Very interesting and well-written article! You address in fact a hot topic. In order to bring your argument further, I suggest that you ask yourself what is the metaethical view related to it. In other words, where moral principles come from? You could then identify how it affects your view on this dilemma. As you mentioned relevant facts such as the unhealthiness of both smoking and vaping, you seem to think that moral principles arise mainly from reason. On the other hand, for San Francisco’ leaders, it seems that moral principles depend upon consequences. As they realize vaping was creating an epidemic issue among teenagers, resulting in harmful consequences, they decided to ban it. These are examples that you could use in your article. By including metaethics in your argument, it will be easier to understand the origins of the different positions on this moral issue.